There's a good chunk of middle-of-the-road mainstream beer brands in my selection and this tastes as expected. It's a lot like the Cooper's 0% beer. Lots of dry hops to give a crisp taste but not much else going on. I expect a lot of these to taste similar.
Still, they're doable. When Holly was pregnant with both kids we had a bunch of these in the house. They're okay but now that I've had the good craft stuff, my expectations are higher. 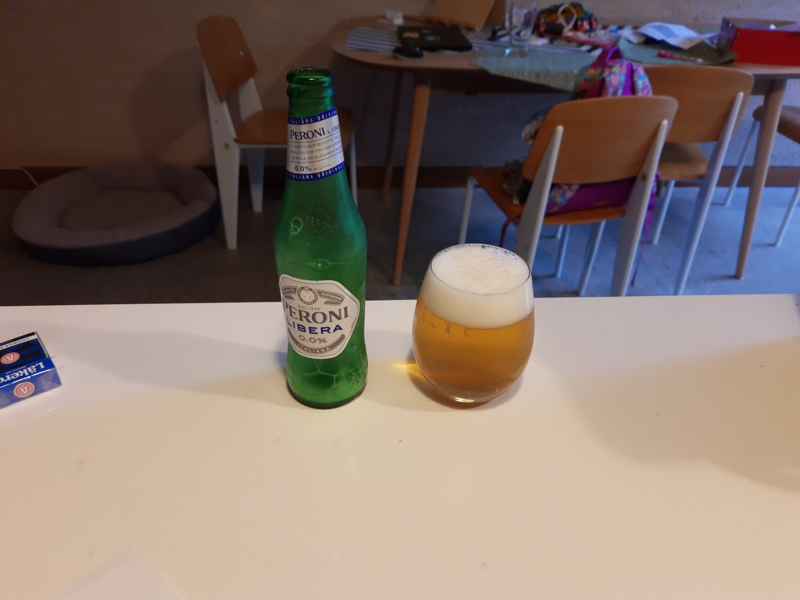 Holly and I are having a break from booze for the month of February. It's a difficult month cos it's often got the hottest stretches of weather all year, so not having a cold beer at the end of an especially hot day.

I went and splurged on $170 worth of no alcohol beers. They range from craft brews to the mainstream like Carlton Zero and Erdinger's alcofree version.
I'll try and review each one I try. First up is Vandestreek's Playground IPA. This is a Dutch brewery but it's a long way from Heineken or Amstel. It's clearly an IPA with a strong bitter hoppiness and a reasonably full body. It's still a bit on the thin side but you have to give up something when you give up the booze. This one's really good and I'd gladly drink it again. 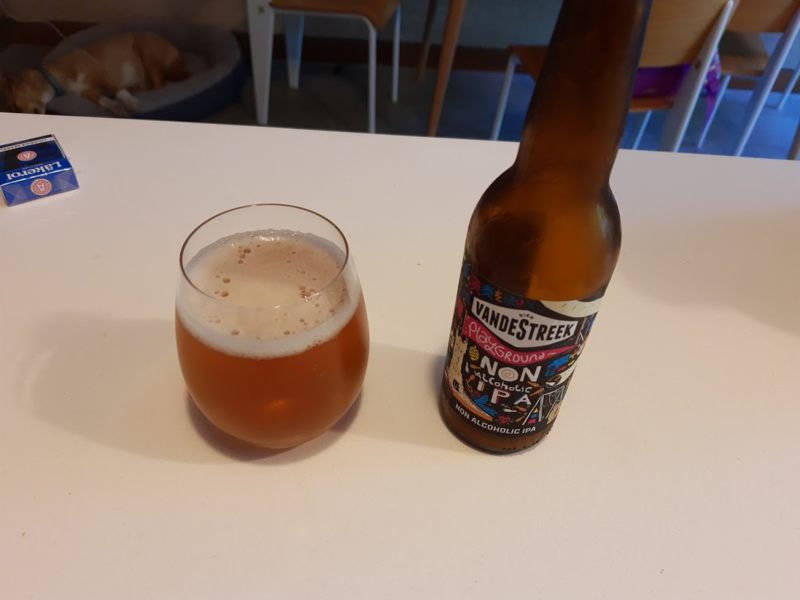 Wow I can't believe I haven't blogged since 2019. I'm going to make an effort to blog a bit more, trying to crank out at least one thing per month, hopefully something thought provoking. I'll probably also chuck up random stuff.
Like, we have a puppy now! We've had her about 3 months now. She's a 9 month Camp Dog from the NT who joined our family after many, many months of searching for a suitable rescue dog.
Her name is Foxie and she's quickly become a much loved member of the family. 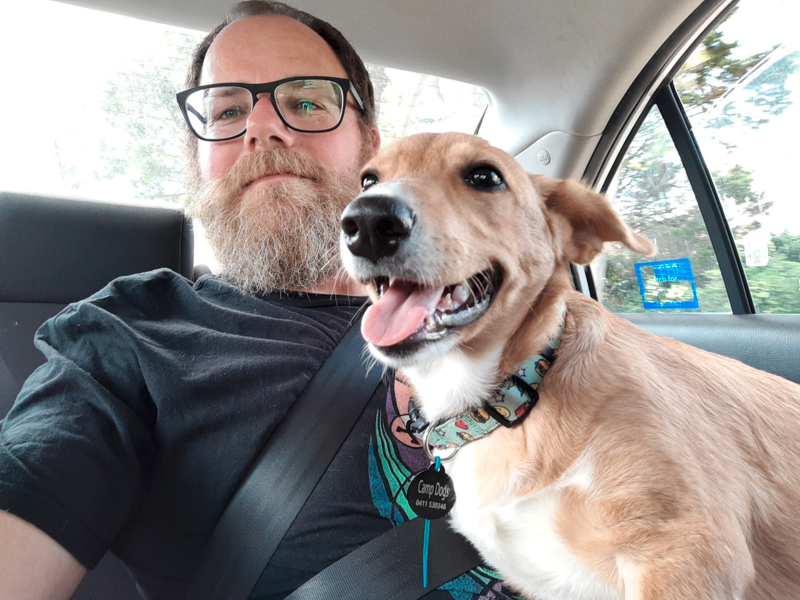 Breed: unknown. We speculate that there's probably some Corgi, Kelpie and maybe Dingo in her, but we're really guessing. 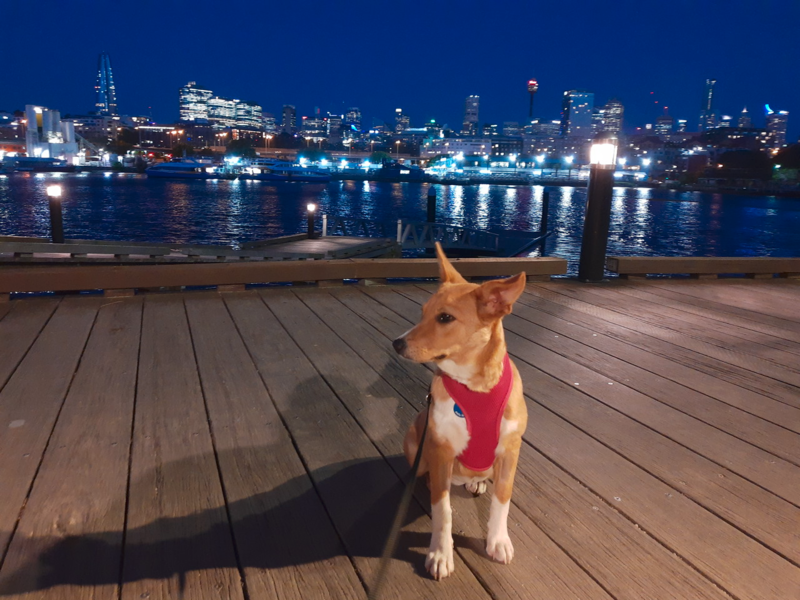 Yesterday I did my second ever Gong Ride, an 83km charity bike ride from Sydney to Wollongong through the Royal National Park and along the coastline. It's a stunning ride with great scenery and a big logistical operation with 10,000 riders.
I did a better job training long term this time around so I made it in about 5 hours, beating last year. But it's not a race and it was really a lot of fun. Challenging in places, especially the hefty long climb up and out of the National Park.
Loads of fun and there's still time for you to donate to the cause for which we were riding, helping people with MS and funding research. 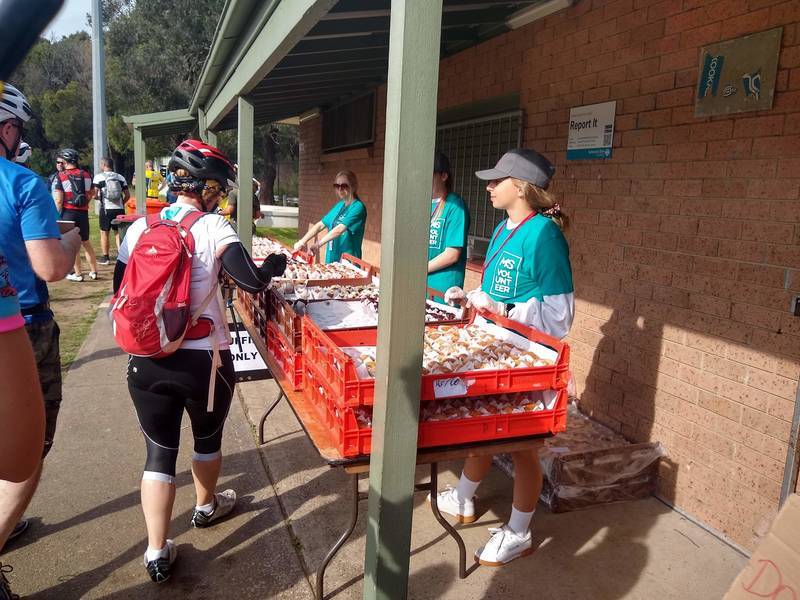 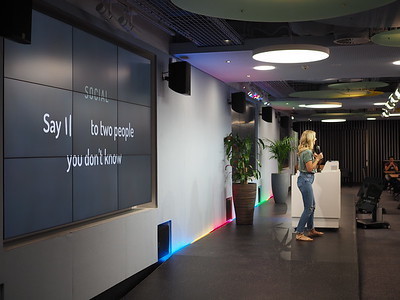 This weekend we held the fourth iteration of MeasureCamp Sydney. For those who don't recognise the term, MeasureCamp is an unconference. A slightly chaotic affair quite unlike an ordinary conference.

It's free. It's on a Saturday. There's no keynote speakers or vendor pitches. Everything is sorted out on the day.

Once things kick off, people rush to write up sessions they plan to run and get them up on the board. The day flows from there. 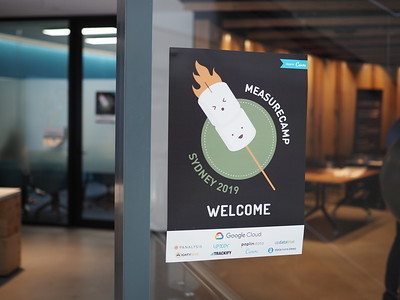 This year we had about 180 people through the door, a record for us. Given it's free, we're always a little unsure of the exact numbers to expect which can be nerve wracking but it's great to see such a large group willing to spend a gorgeous sunny Saturday indoors learning from each other and sharing knowledge. 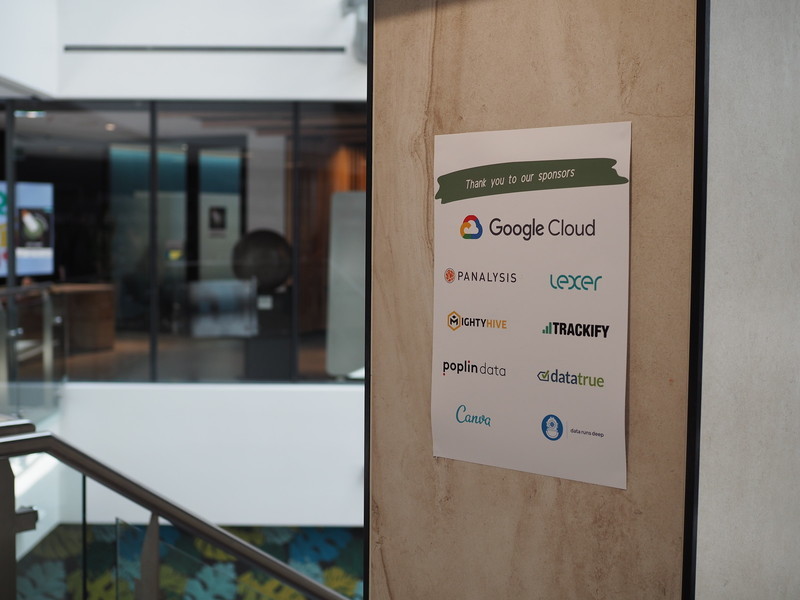 We're able to do this because of an amazing sponsors who chip in the funds to house, clothe and feed all the attendees. Without them we wouldn't be able to do it! 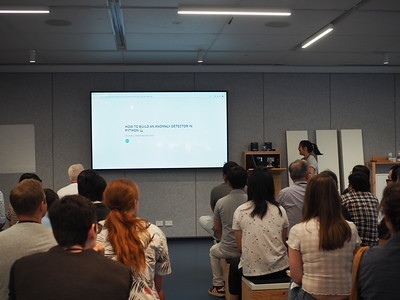 Highlights for me? I really dug Vincey Au's session on building anomaly detection in Python and Corinne Brooker's Introvert's Guide to the Galaxy where she explained how to make the most of both your loud extroverts and your quieter, more thoughtful introverts. 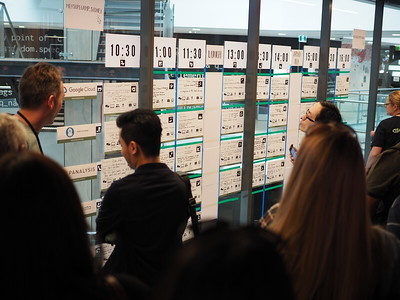 It was a brilliant day and we all learnt heaps. Afterwards we retired to a local pub for food, drink and analytics trivia. Lots of great prizes handed out for some very creative answers and work on the Pop Charts. 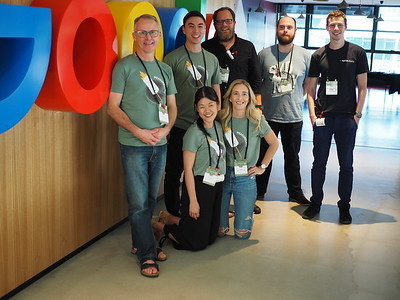 And the whole thing wouldn't happen without our amazing organising committee who've put in countless hours of hard work to make it happen. It's the fourth year so we're getting pretty smooth with it these days, but there's still a lot of work finding sponsors and badgering for payment, organising t-shirts, catering, venues, lanyards, volunteers, software, websites, emails. Thanks so much for Rod, Josh, Priscilla, Moe, Jethro, Mike, Calum and Chaoming for all the hard work.

I took a bunch of photos.

Some more roundups from LinkedIn:

This has become quite topical again with The Guardian and Good Food weighing in on the best biscuits in a standard Arnott's assortment. Of course the moral of that story is to not buy the assortment. You end up with mostly terrible biscuits. Just buy individual packs of Kingstons and Monte Carlos.

However, back in 2016 my other half and I were arguing about biscuit purchases. My point was that if you're eating a biscuit, you're already on the hook for a decent dollop of sugar and fat. My partner kept buying the biscuits that tasted like they'd been made out of pencil shavings. Digestives, those awful fruit pillow things etc. Being a data nerd, I decided to win the argument with data.

I downloaded the Arnott's nutritional information and parsed the table into a spreadsheet, then pulled together a visualisation in Tableau.

As you can see, there's not a huge amount of difference in kilojoule content between the tasty biscuits like Kingstons and Tim Tams and those godawful shredded wheat and fruit pillow things. If you want to avoid fat and sugar, have an apple.

I presented my findings to Web Analytics Wednesday as well.

It's been amazing watching the youngest slowly get better at reading, then suddenly become hooked. The last week she's had her nose in books at every opportunity. It feels wrong telling her to put the book down at the dinner table! 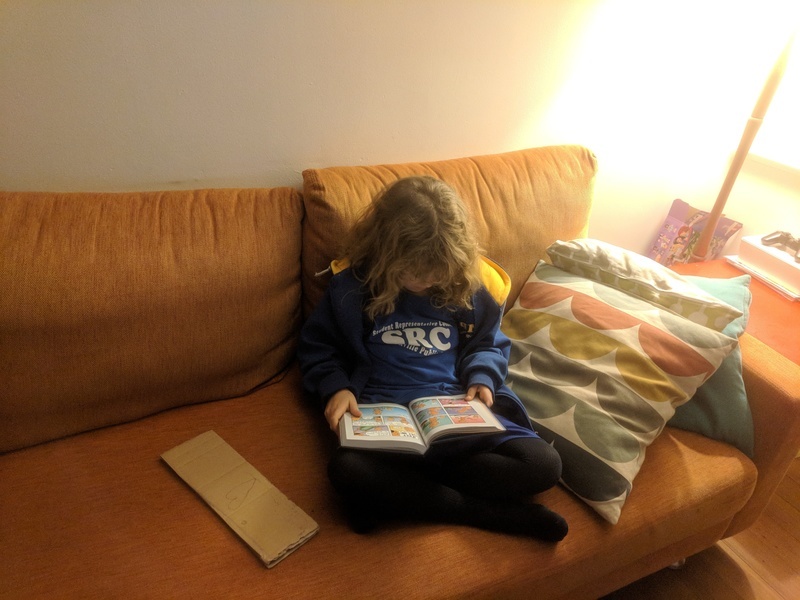 So proud of my little girl. This stage of development is so rapid, so rewarding.

I spent last week down on the Far South Coast of NSW camping. I got the opportunity to try out my new ﻿uBitx radio, which is an incredible short form kit transceiver. Lots of fun. 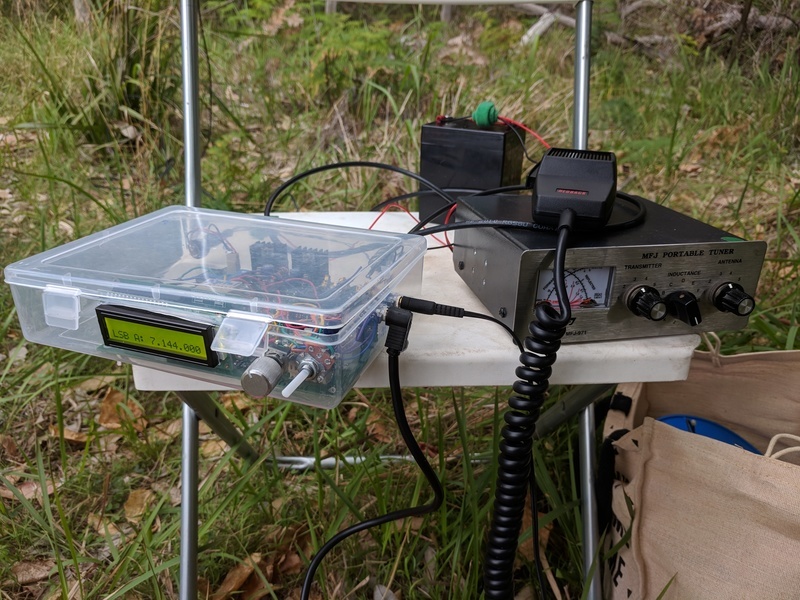 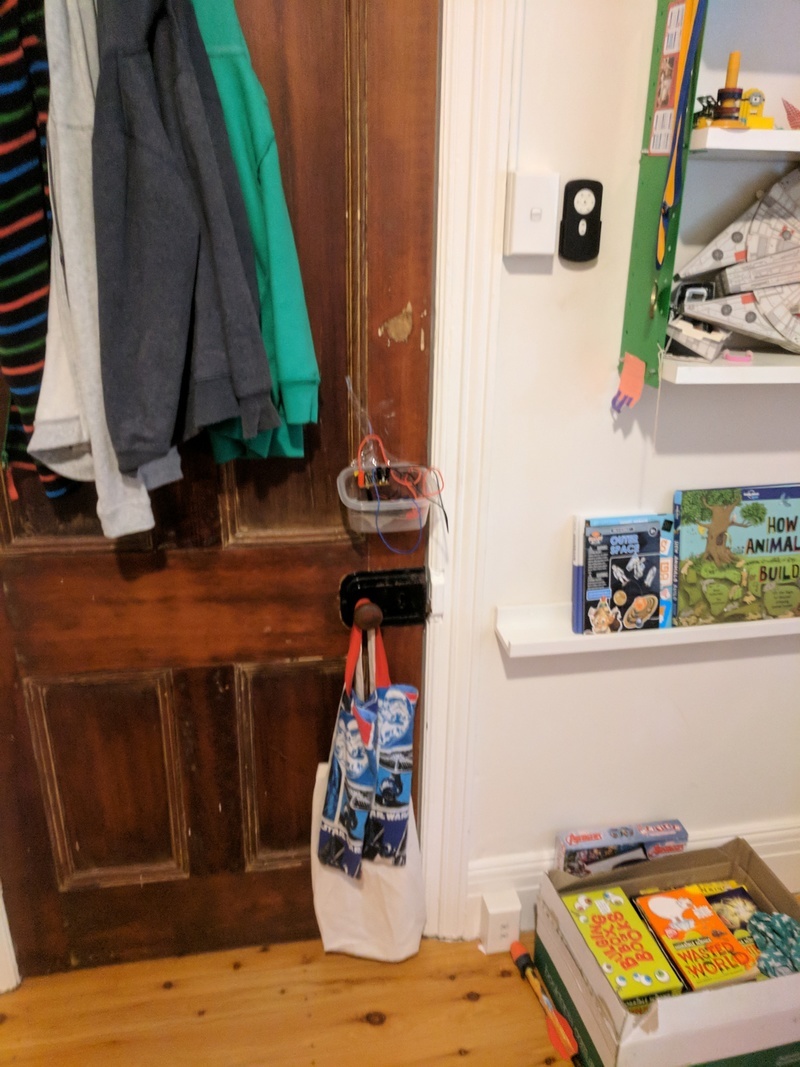 Yesterday I passed my Standard amateur radio license tests. I spent quite a bit of time cramming lots of knowledge in my brain using the video course from the Radio & Electronics School, then took the exam out at the Waverley Amateur Radio Society.

I decided to go straight for the "Standard" license because I have little interest in voice and morse code modes. I want to jump straight into HF digital to communicate around the globe, and possibly play with bouncing signals OFF THE MOON.

The course was really fun. Good revision of my Year 11 Physics (which was a very long time ago, and I didn't really pay enough attention at the time) and Mathematics. Then while working through radio physics, practical receivers and transmitters there were quite a few "a ha!" moments where things I'd always wanted to know suddenly became clear.

In the end the exams were quite easy. You can get 30% wrong, which is pretty lenient, and the multiple choice format means usually two answers are obviously wrong, so your odds can be pretty good even when you're not sure.

It's made me think I should now go for the Advanced ticket. Lots more to learn and I actually really enjoyed learning again.

Notes on the course and Linux

I run Linux and the Radio & Electronics School's course assumed you're running Windows, so here's some pointers.

Ask Ron for the DVD image and mount it. Then uncompress all the video files with (the quotes mean the wildcard string isn't interpreted by your shell, which will not do what you want):

I converted the video files to mp4 so I could play them more easily on my tablet. I also sped them up because Ron talks very slowly, which might be fine for some but made me impatient. I did that with ffmpeg like this:

The drill software runs almost perfectly using Wine. Just associate ".exe" with wine and you can double-click on them and work through them.

Finally, I created this cram sheet to drill myself on some of the rote learning components. I'm not brilliant at rote learning, so needed to work a bit on this. The phonetic alphabet wasn't too hard for me as I spent my childhood flying around in little planes with my Dad and evidently learned it through osmosis. The rest isn't all that obvious and just has to be crammed in. You could also memorise the frequency bands which are part of the regulations exam, but I just assumed they'd end up being absorbed by my 30% pass margin.