If you're going to call yourself a "web producer", surely you could take the time to learn a little about the field in which you work?  I would expect a "TV producer" to know the difference between 16:9 and 4:3 aspect ratios.  A web producer who doesn't know what an iframe is, and hides behind "oh I'm not technical", is not fit for purpose.  Show some professional curiosity fercrissake.

(rant mode off)
Rolling news has always pissed me off.  When nothing big is happening and you just want a summary of the day's stories, they're running some long-form programming that's not news.  When something big is happening, they fill the dead air with minutiae and uninformed speculation, never giving the quick and succinct summary you want.
Working in London during the July bombings, the BBC switched to the rolling news format and was filled with pundits beginning their spiels with phrases like "we don't know all the facts, but if what we're seeing is a terrorist attack..." which was, of course, incredibly frustrating.  It wasn't helped by the fact the British media continued to claim there were "power surges" on the tube, not bombs, long after it'd been confirmed as bombs everywhere else in the world, including whatever my Mum was watching back in Sydney. (I rode my bike to work that day, so didn't notice anything unusual at all until I got to work and found a text message from my Mum asking if I was all right.) 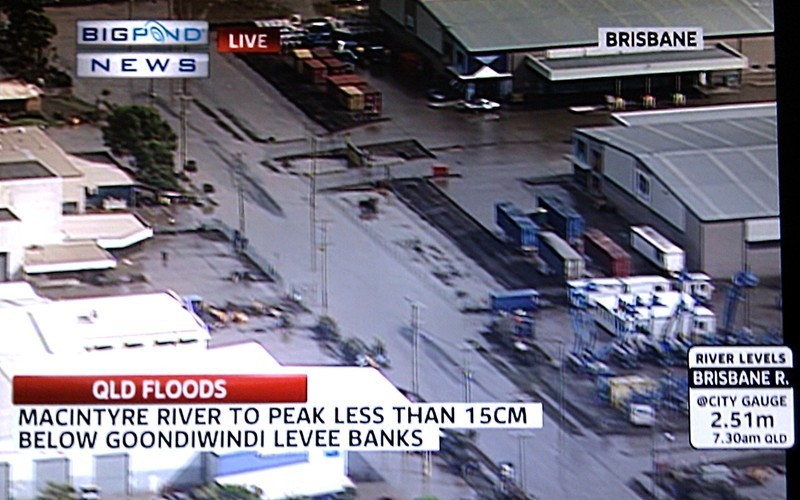 The last few days, with terrible floods in Queensland, we've had Sky News on at the office. What a waste of space!  They fill the air with endless raw footage from a helicopter and random speculation about what could or might happen.  It makes what should be a shocking vista seem mundane with its endless repetition.  At one point we were treated to half an hour spent looping two minutes' footage of people making themselves cups of tea at the Ipswich dogs club evacuation centre.  Gripping stuff!
When I get home I find the ABC has been infected by this idiocy too.  There's a whole channel set aside for this inane crap, but when there's something big happening they switch ABC1 to the same pointless format.  At 19:00 when I expect my normal news summary, instead we get rolling news inanity.  File footage with the talking head speaking to the owner of a roadhouse in Goondiwindi.  THIS SHIT IS NOT NEWS PEOPLE!
Get a grip people.  We want news bulletins that summarise the big stories of the day.  Keep the rolling news crap where it belongs, on the rolling news channel!
A better format for news?
Here's the rolling news service I'd like to see.  It should be doable with IPTV these days too.  Have your talking head spend all the time putting together  and updating news segments in the style of a news bulletin.  These are then chopped into individual clips and stuck into a playlist in order of story importance.  Then whenever someone says they want the latest updated news, they get the current playlist streamed to them.
Of course being a one-to-one transmission, there's no reason you couldn't customise the story categories in your news stream.  Don't care about sport?  Register your preference and never see a sport story.  Particularly interested in stories involving France?  Register for that tag and more importance will be given to stories about France.
The clever way to do this would be to take your existing rolling news service and have a producer editing up the pieces as you go and sticking them in the playlist.  That way you could do it with minimal additional resources.
Being invited to attend a company's "Customer Advisory Board" is nice.  It recognises my real-world experience with their products, and hopefully means some of my ideas will end up in the product, making my work life easier in the future.  I'm not surprised that I've been asked to sign an agreement, since I'd be giving them ideas that might end up in their product. However I most certainly don't expect that agreement to include the following clause:

You further agree that you shall not make, via private blogs or any other communication method, negative or misleading comments about <company> or our products

If that's the way you want it, you'll have to live without my attendance.
So I'm copying files onto an SD card to go into a digital photo frame and suddenly get this message:

Odd.  I check whether there's space on the card.  Loads.  I check that the file names aren't too long somehow.  Nope.
Turns out that the SD card is formatted as "FAT" -- the old, very basic DOS file system -- and there's a limit to the number of files you can place in the root directory.  Moving the new files to a new subdirectory solved the problem.  Great.
Now try explaining that to my Mum.  Particularly when she's received that wonderfully useful error message!
In Britain before the crash, "Rip off Britain" was a common trope for newspapers, comparing prices for identical products with the prices charged on the continent or across the Atlantic. There must be something about booming economies because Australia sure suffers from being ripped off.

We're in the market for a baby bike seat for Louis so we can transport him to and from childcare when Holly goes back to work.  The WeeRide comes well recommended, as it allows the baby to go on the front and can be switched between bikes easily -- handy for drop offs by one of us and pick ups by the other.
From the Australian vendor, this seat costs AU$169. From a US vendor it's US$59.99. At today's exchange rate that's AUD$66.90. Now sure, we have GST so add 10% and it's AUD$73.59 but we're still looking at nearly $100 difference, more than double the price.
What really gets my goat, though, is the book industry in Australia crying poor while I can buy Australian-published books cheaper from overseas than I can buy them here, including delivery and exchange rate conversions!

Here's Luke Nguyen's Australian-published cookbook. According to Booko, Book Depository UK can deliver it to me for AUD$37.57. The cheapest Australian supplier, $59.97. So it's cheaper to ship it to the UK, then ship it back than it is to ship it from Australia.  Insane.
Meanwhile, Australian wholesalers and retailers complain about parallel importing destroying their businesses...

It's no secret I'm no fan of recruitment consultants. They're up there with estate agents in being leeches on society that provide no value while scraping off their percentage. Their inability to understand social norms is infuriating. The way they don't seem to understand that talking about your career over the phone in an open plan office isn't really convenient is just bizarre, though as a class they seem unable to carry out a conversation by email.

Jeremy Champion takes the audacity and rudeness to new heights. My LinkedIn profile is very explicit:

You can't get much clearer than that. Which is what makes the note I just received from Jeremy Champion of Connect Digital, a recruiter, so infuriating.

Hi Simon- I read the note at the bottom of you page :) Sure I am a recruiter, although am after some help please if yuou don't mind. A client of mine is looing for a Web Analytics Manager to head up a new team within a leading Search Agency. Any chance you might be able to refer anyone to me please.

So not only does he go against my extremely simple, explicit request, he admits to reading it and just plowing on ahead anyway. Jeremy, welcome to my recruiter blacklist. This list is for those who go above and beyond even their shoddy class in terms of ethics and rude behaviour. Josephine's Cheese, given your site has no contact information, and doesn't even display the product I bought, I'll have to howl into the aether and assume you'll find it when I SEO your arse (given Google doesn't even see your image-only site, that won't be hard).

So I bought your "Traditional Goat's Cheese in Ash" last week. It was delicious. Unfortunately your packaging is abysmal. After very carefully peeling off the label, you're presented with this tube of squished cheese. If you take care from this point, and happen to have scissors or a sharp knife handy, you can just about get a single blob of cheese out ready to serve. More likely you'll end up with more like a tube of cheese toothpaste squirted out onto your serving location.

Great cheese. I won't buy it again in this packaging. Buy your competitors' products and learn.

Telemarketers are scum and I don't want to talk with them, especially since our number is on the Do Not Call list and they're willing to ignore that (yes I know you're a charity, but that doesn't give you an excuse for rudeness).

Old people have no understanding of the social graces modern technology allows. They think the primary advantage of a mobile phone is that the caller can contact the callee anywhere, anytime. The real advantage of mobiles is the ability to switch it off and divert to voicemail, to deal with later. My Mum answers the phone during dinner, during her favourite (untimeshifted) TV shows, any time it rings. Hell, she's polite to telemarketing scum.

Old people don't get this. Yesterday I had one trying to call me while I'm at work. I rejected the call and diverted to voicemail. He hangs up without calling leaving a message. He calls the home phone, where Holly and Louis get woken up, massively improving everyone's mood. It goes to the answering machine. The caller doesn't leave a message. And redials the home phone. Then calls my mobile again.

Now granted, in a genuine emergency this might be reasonable, but if I pick up the phone in these circumstances and there's no emergency, don't get all offended when I tell you to stop being so rude and hang up.

But the oldies don't get it. They're PAYING to talk to you, so you should answer. They come from a time before texts, voicemail, answering machines. Hell my Mum's first home phone was a "party line" shared with half the street so they didn't even have privacy.

So I'm gonna reduce the options. I've had no luck getting the message through that serial dialling isn't on, so I'm dropping the home phone. I'll use voip for cheaper outbound calls. And no, if you're over 50 you don't get to have my work landline number either.

Why are all IT recruiters:

I don't get it. My theory on the last two is that they're mostly not very good at computers, hence their career choice of leeching off those who are. Why their all poms, not a clue.

There are some honourable exceptions to this, but they're thin on the ground.

Now I thought I'd become suitably curmudgeonly with age, what with still using a text-mode email client and grumbling about HTML posts. But it's always good to know there's someone better at something than you. Gives you something to strive for.

Enter Tom Ellard's Soggy The Sailor rant. I bow before the master.