I've never been a skinny guy. The fittest I've ever been, playing rugby in my mid-teens, I was still chunky bloke. Helped me avoid being bullied. As an adult, my weight has gradually crept up. Finally I've decided to do something about it, mainly because the 5:2 diet came along and appeals to me.

The idea is you can eat anything you like 5 days a week, but for 2 days a week you drastically reduce your calorie intake, 500 kCalories for women and 600 for men. This has an important psychological effect. With a normal diet, high calorie foods you really love are pretty much off limits. This diet means that on fast day you can say to yourself you can eat the thing tomorrow. You won't necessarily eat it (I find my appetite is somewhat lower the day after a fast), and obviously you can't go absolutely nuts and you should aim for normal moderation on non-fast days.

You'll read some stuff about other health benefits from fasting, things like the "repair gene" and the like. I'm dubious. The science behind these claims is only solid for different patterns of fasting: long-term fasts, alternate day fasts and the like. There hasn't been much research into this particular pattern, though the weight loss parts are pretty clear.

For me, I've been doing it since the end of October and in those eight weeks I've lost about eight kilograms. That's about as fast as you want to lose weight in a sustained fashion. Other indicators are also good: I've dropped three belt notches, my "tight" jeans are starting to feel loose, I'm contemplating buying a bunch of new clothes, and my blood pressure was described by my doctor as "perfect" last week, which is awesome.

I think the psychological aspect of this diet makes it really easy to sustain. It takes some planning and being a data nerd I have a spreadsheet to track what I eat and various measurements to track my progress. By planning things in quite a bit of detail, you can focus on bulky but low calorie foods that will fill you up and ward off hunger. I rarely feel particularly hungry. Lunch time I actually have later than normal days, though I do drink a fair whack of caffeine on fast days. By dinner time I'm generally quite hungry, but not for hours beforehand, and if I've chosen good food options I'm not hungry again until morning.

The eight weeks have flown by, Tuesdays and Thursdays are my regular fast days and I've developed a bit of a routine. On fast mornings, I get up and make the kids their breakfast. Then I start my own breakfast of Shakshouka, a North African dish of tomatoes and eggs that I've been eating regularly for a fair while.

While that's simmering, I chop up a huge amount of vegetables, particularly carrots, to eat raw for my lunch. I might pop out into the garden and harvest whatever's going there too, mostly lettuce and rocket. While I'm preparing all this, I weight and write down each piece. Once I get to work I'll look up the calories pm Calorie Count and fill in my spreadsheet, which gives me my calorie budget for dinner.

Shakshouka (~240 kCal, but weight your ingredients) 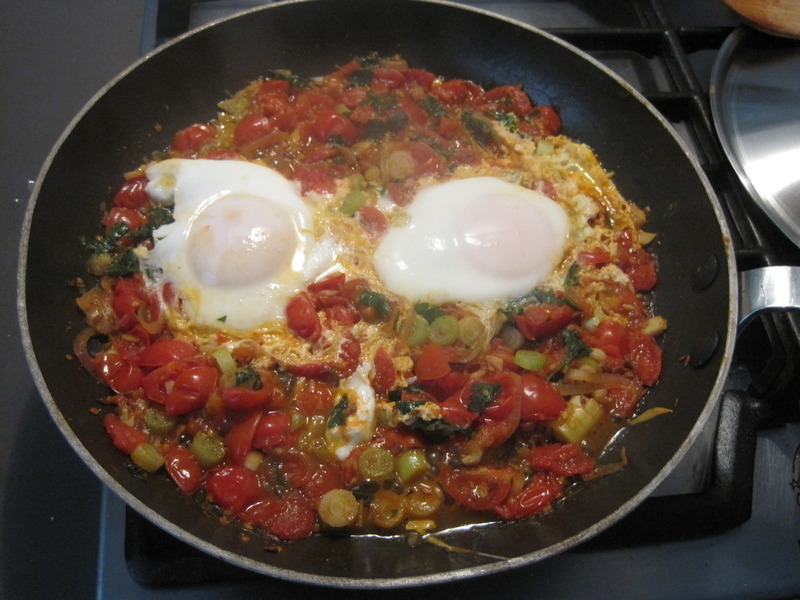 (This picture is taken pre diet and so it's probably a fair bit bigger and has some other ingredients.)

Dinner is often some simply cooked fish like flathead and some more vegetables, steamed or raw, eaten with the kids. Tuesday nights have become fish night in our household. We've also been enjoying Haemul Paejeon, a Korean prawn pancake, which is ridiculously quick to make and packs a massive amount of flavour. I've also tried out a few other recipes, there's loads on the net. 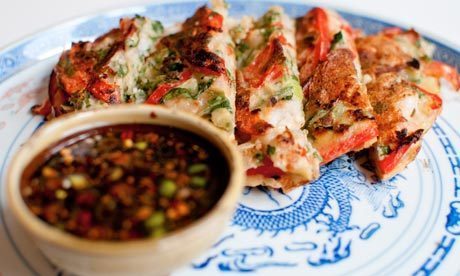 So I'd have to say I strongly recommend this approach to weight loss. I've been doing it two months and don't feel like I'll stop until I hit the healthy BMI range, which at the current rate will be about February or so. Even then I think I'll go on a maintenance regime, perhaps a fast a week. We'll see how I go over the festive season, there may be some setbacks...