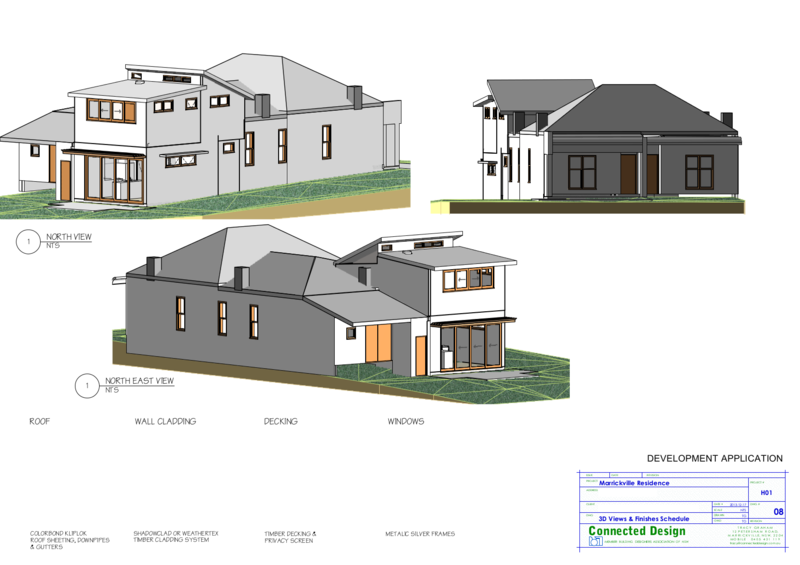 For those I haven't mentioned it to, we're about to do a major renovation on the house. We've lived here nearly 8 years and done a couple of little changes over the time, opening up the dividing wall between the kitchen and lounge room, re-doing the kitchen and bathroom, and adding on a little laundry out the back. But we've reached the limits.

We spent a few months looking around for somewhere with a bit more space in our area. The Sydney property insanity combined with how much we love the area meant anything suitable with 3 bedrooms was in the $1.4 million+ range which is just nuts. So we decided to extend.

Fortunately we have an awesome building designer in Tracy. She's probably spent an average of a day a week in our house since our first kids were born on the same day 5.5 years ago. She's managed to work out a really clever design that builds us two more bedrooms, creates a really functional and bright kitchen/dining space while maximising the amount of sun we get and heat it'll keep in. All while keeping to the same envelope of land use.

We're going up and down at once. The back half of the house will be demolished completely, then a new ground level much closer to the ground will develop. A bathroom will sit next to stairs down to the kitchen/dining and stairs up to the new first floor. Upstairs we'll have two bedrooms and another small bathroom. The back of the house will be a wide glazed view out to the garden. All the new windows will be double-glazed, providing great thermal performance and substantially reducing the impact of the ever-present planes going overhead.

Excitingly, we're building with Hempcrete! It's basically walls constructed from the cellulose core of the hemp plant and some lime. The walls will be quite thick and providing good sealing as it's built into forms on-site. Thermal and acoustic performance is stratospheric, it's carbon ﻿negative﻿ and breathable to allow Sydney's humid Summer air a way to escape.

Pretty exciting! We move out today into my parents' place for 3-4 months, then it should be done. I'll post some "before" photos once we've finished moving all the boxes out of the bit that's going.